Seconds later she felt his hand on her dress sliding it up her legs then her thighs. Michael spread her legs open and inhaled deeply. London wondered if he could see how wet she was through the sheer black fabric of her panties. Next she felt him tugging at her panties. London lifted her hips slightly and he proceeded to slide her panties down her legs.

Her hips jerked when she felt his warm breath at her center.
He spread her legs further apart. She wanted to look but he’d told her not to. It took every ounce of will power she had for her not to lift her head from the couch and stare down at him, on his knees, between her legs. The first swipe of his tongue against her sensitive flesh…

With him away on his business trip and his journal in her possession, there was nothing he could do to stop her from reading his most private thoughts.

London didn’t think of it as an invasion of privacy, it was more like a chance to finally understand how the man she loved thought. Her learning these things would only make their relationship stronger.

Who was she kidding?

She was reading it because he was clumsy enough to forget it and she was nosy enough to look through it – consequences be damn.

She didn’t know if she wanted to read any further. Was that what he thought of her, that she would never be a good submissive?

Well, she wasn’t a good submissive. He’d known that the moment he met her. Though she tried her best, well not her best but she did try. She knew she would never be like the other subs he’d had in the past.

London laid her head back against her pillow and closed her eyes. She knew she should put his journal away and at least pretend she was a good sub by not reading it. But she couldn’t, the rebel in her wouldn’t let her put it away.

Her phone vibrated again, and again it was him. She didn’t want to answer but she had been avoiding his calls all day. She knew he was probably pissed with her. London picked up her phone and accepted the call.

“Hello,” she said trying to sound innocent. How did one feign innocence over the phone?

“Do you have it in your hands?”

She missed his deep voice. She knew exactly what he was talking about but decided to tease him.

“Yes,” she said seductively. “I have your whip in my hands. I’m running my hands up and down the length of it wishing it was you instead.”

Her Dom chuckled, a good sign, maybe he wasn’t as pissed as she thought he would be.

“I miss you, love,” he whispered and those four simple words made her feel like the biggest loser. Here she was reading his personal journal that he’d asked her numerous times not to touch. She was ignoring his phone calls and after all of that he still loved her.

“I miss you also,” she whispered as she mentally chastised herself. “Yes it’s in my hands,” she confessed to him.

He laughed, “I figured as much. Play me a song. I love listening to you play.”

SAY WHAT! He was asking her was her guitar in her hands. OHHHH!

“Um,” she searched her brain for a lie, any lie, “I can’t hear you,” she said. “You’re breaking up.” She didn’t even know where her blasted guitar was.

“But I can hear you,” her Dom said, his voice was laced with suspicion.

“Let me call you back, I think we have a bad connection.”

She hung up before he could finish his sentence.

He didn’t even know she had his journal. Well damn. 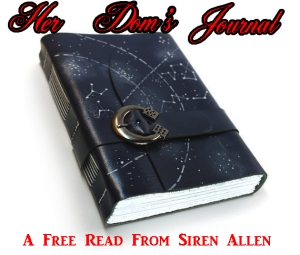