I’m happy to announce that in a couple of months I’ll be releasing my Sci-Fi novel, Her Alien Protector. This is an interracial paranormal romance that is out of this world, literally. I can’t wait for you all to meet Lark and Raynor.

Their road to love is a bumpy one, but is worth it in the end. Her Alien Protector will be available in May. More info on this steamy novel coming soon. 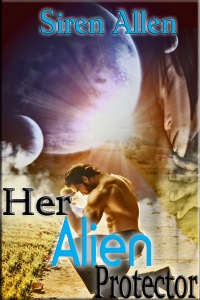 Raynor Batiste was many things: a monster, a killer, one of the most feared creatures in the galaxy. He was a beast whose name sent shudders through his enemies. But a prisoner he was not. The only reason he’d allowed himself to be captured was so he could claim his mate, Lark Valdese.

He’s willing to protect her planet, but his aid comes at a price. A price only Lark can pay.